My 6-year-old son has an unfortunate cowlick that leaves his hair looking like Eddie Munster's. You know: 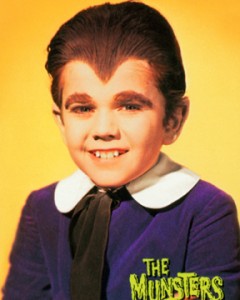 My kid has other fine qualities, but today I couldn't take any more of looking at that downward dagger of hair, so I took him to Supercuts, where I pointed out the problematic fibers to what I naturally assumed was a hair-cutting professional. She promised she could help, but then asked the question I always find impossible to understand: "What number should I use?" As in, which numbered attachment should she slip onto the electric trimmer. To which I always reply: "I don't know. You're the hair-cutting professional." If I knew how to do this, I wouldn't need her, and could save $13 and having to make some elaborate bargain with my 6-year-old to get his hair cut. (Today it involved my buying extra darts for his Nerf gun.) She told me she would do her best to make it look nice and I sat down to play poker on my iPhone, looking up intermittently to see that the kid was, indeed, shedding hair but not blood.

Several minutes later, the woman called me over to consult. She fingered the offending hair pattern, lifting it to display whorls on each side that result in the defiant inverted pyramid. There is no way to eliminate it, she told me, without shaving that section of his forehead. Imagining how badly this could go for me back at home, where my bedridden wife wasn't cheery to begin with, I demurred. The Supercuts woman finished off the rest of the haircut, I gave the kid a glance over, paid, collected his two siblings, and off we were to buy spongy darts to be shot at me.

It was at Toys 'r' Us that I really took a look at the haircut. I thought I was hallucinating. The entire head of hair was cut across in uneven straight lines of varying depths. I couldn't decide if my son's hair looked more like a display of carpet samples, or a textbook example of crop rotation. 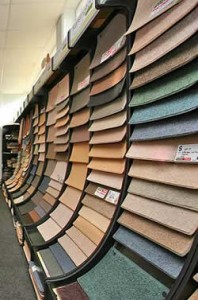 I told the kids not to say anything to my wife. "Let's see if she notices," I said. Later at home when I heard her shriek from the bedroom, I called in response, "I'm taking him back tomorrow!"

But here's where I learned two things -- and this ultimately is the point of this story.

First, my wife's insight: "You can't just drop in to Supercuts. You have to know who's working that day." If this is true, then either my wife or I or Supercuts has a real misunderstanding about their business. Because when my wife is saying that, for example, Julie is good at cutting hair at Supercuts but Magda isn't, she's saying that Supercuts has specialists. But I believe Supercuts to be in a commodities business, one where there are only so many different shapes of heads, and only a few basic models of haircuts, and everything can be standardized into the equivalent of the black rotary telephone. Hence the customary demand for the customer to name the numbered attachment. Hence the ability to render a haircut in only the time it takes most of us to go to the refrigerator. If Supercuts is not the tonsorial equivalent of Jiffy Lube, and it is also clearly not the chic gay salon I pass on the way to the theatre, then it is somewhere in the middle -- and I don't think that's where they want to be. And yet I cannot deny that just last week I myself got a haircut at this same Supercuts, performed by Julie, and it has worked out just fine. So based upon the evidence, it does help to get the right person, and one shouldn't just drop in and let the sausage-maker wield the scissors. Lesson learned.

Second, my own insight: This episode provided me with another reminder that just because one person says something can't be done, that doesn't mean that someone else can't do it. (And, relatedly, we should never confuse elevated status with actual expertise. Case in point: Any number of world leaders throughout history.) Just because Magda, as I've named her, couldn't fashionably level the pyramid, that doesn't mean that someone else couldn't have.

The haircut is a disaster of 7.0 on the Richter scale, and while taking my son to get it provided a mild diversion, taking him back for correction (or full head-shaving) is an infuriating time suck. But it may have been worth that, plus the purchase price, to be reminded that respect for expertise must be earned.