Who exactly was Sisyphus, and why does he set such a great example we should follow of how not to be?

As you may remember from high school, in the Greek myth of Sisyphus, the title character was a king cursed by Zeus to forever roll a boulder up a hill in the depths of Hades, only to always have it roll back down.

He was cursed in this way because of his arrogance and deceitfulness. So lesson number one here is: Don’t be a jerk.

The reason this myth resonates with most of us is because we can relate at some point or another to that terrible feeling of achieving nothing, just like someone condemned to push the same rock up the same hill fruitlessly every day. You’ve put in the work, you’ve done everything you’re supposed to, and at the end of the day or the week or the month, you’re left scratching your head and wondering what you actually accomplished…. Just as the giant rock rolls back down the hill and over your head, setting you up for more tomorrow.

(I promise this post gets more upbeat in just a minute. Hang on.)

If you find yourself in a Sisyphean state, there are two solutions:

Which begs the question:

Who says you have to roll that same rock up the same hill every day?

It’s easy to get stuck in the pointlessness of same-o same-o. We are all in danger of it, of one day waking up and thinking, “Well, here starts another day in the salt mine…” and then trudging over to your work area. Fred Flintstone, we should remember, yells “Yabba-dabba-doo!” only when he’s leaving an endless day of… yes… moving boulders up a hill.

That stuck feeling itching at your insides? That comes of focusing on tasks rather than goals. It comes of listing the things that “must” be done — and let’s admit that our definition of “must” is frequently pretty loose — and approaching those tasks as the highest priority, rather than looking at the goal as the target to hit.

The consequence of focusing on tasks without first setting goals — or, as we like to say in a larger sense, a strategy — is that you run the risk of missing the larger point.  Of missing the target. Of missing the goal.

Both for ourselves and certainly for clients, we at Counterintuity are ever-alert to the  confusion between doing tasks and pursuing goals. Whenever someone comes to us asking for a specific implement, an implement being a tool such as a website design or a social media campaign, we ask what they’re trying to build. What we’re really digging for is the goal that they think the website design or social media campaign (or whatever) will address.

The website, or the social media campaign, or whatever the “thing” is — isn’t itself the need. It may be a factor that’s intrinsically important to meet the goal. But it is meeting the overall goal that’s important, with the website serving as a potential factor in meeting that goal.

The three steps to stop being Sisyphus, then, are to:

But, you say, what if some of those unfun tasks are actually important? Well, then you do them. This is where the Covey quadrant, drawn from Stephen Covey’s brilliant The 7 Habits of Highly Effective People comes into play. 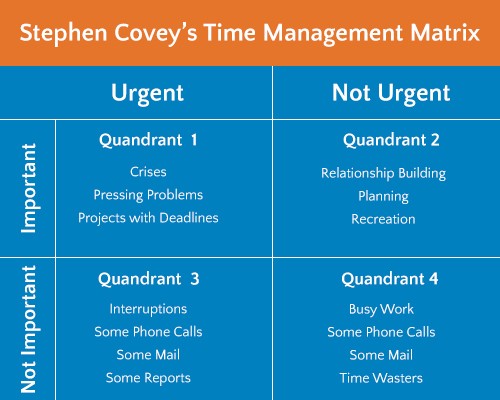 Note the upper-left quadrant. It doesn’t matter that you hadn’t planned for your house to be burning down that day — if it is, call the fire department, then grab a hose if you can. Emergencies are called emergencies because they are emergent. If something is a crisis, you handle it.

Barring that, take note of Quadrant 2, in the upper right, where “planning” is included. Your strategy came through planning, and your ongoing work to achieve your strategy also belongs there; the house isn’t on fire, but boy are you lit up to achieve something great.

Quadrant 3 in the lower left is the zone of interruption — and, gee, it happens. This is where other quotidian tasks go. We all have them, and even for the fabulously rich or fabulously famous, they never fully go away. Yes, Elton John puts his socks on one at a time. The important thing is not to focus on these things. These are not the things you went to bed the night before dreaming about doing. Just put on your socks and shoes and head off to the important things.

And Quadrant 4, on the lower right, is the seventh circle of Hell. These are the time-wasters that we’ll all regret on our deathbed. The things down there are not important and not urgent, sapping you of time and leaving you stuck. And, by the way, what actually happens in Dante’s seventh circle of Hell? That’s where traitors are forever encased in ice, presenting a great metaphor:  of betraying our inner impulse to achieve greatness by allowing ourselves to get stuck in a block of ice of our own creation. Those time-wasting things tempted us, and we succumbed. Maybe taking Monday afternoon and hitting autopilot wasn’t so bad. But when that rolls into Tuesday… and Wednesday… and more… then you’re truly in a Hell of your own making.

Every day, for eons now, while rolling that rock up the hill, has Sisyphus ever stopped to think, “How do I break this cycle?”

Has it occurred to Sisyphus that, because Zeus sentenced him to this service, Zeus could also relieve him of it?

A little apology from the former king might go a long way.

But to do that, Sisyphus would first have to realize: The point of this was never to roll the rock up the hill. The point was to punish me, and I now get it.

To make a greater impact, then, the first thing we all need to do is to recognize how we aren’t.

Imagine the success we all could have and all could benefit from… if we did better things with our time than pushing rocks uphill.

Lee Wochner is the CEO of Counterintuity, a leading provider of marketing initiatives to non-profits and the public sector. Recognized as a California Thinker, he has helped important organizations achieve greater impact for 25 years.