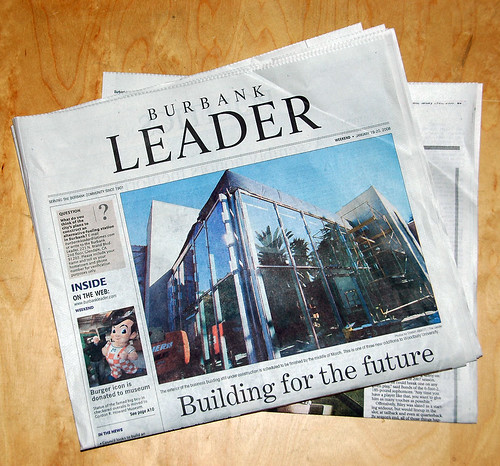 Audrey Robles doesn’t panic about the economic slowdown or the dwindling foot traffic outside her Kenneth Village store. Instead, she fires up her Twitter account.

She also posts to her blog, monitors her Facebook page and adds to her biweekly e-mail newsletter.

The media blitz may seem aggressive to those unfamiliar with the social networking tools, but Robles credits her efforts for not only keeping audrey*k boutique in the black, but pushing it to new heights as well.

“This year has actually been our most profitable year in the three years since I’ve been here,” she said. “So even though there is a recession, customers still come and buy.”

Robles is not alone.

From real estate agents and restaurants to car dealerships and shopping malls, businesses in Glendale and Burbank are increasingly buying into a nationwide trend toward using social media as a tool to expand their reach and connect with consumers who have more options than ever before.

While some business owners have experimented with Web-based services and given up on them, social networking tools like Twitter and Facebook are developing into valuable marketing frontiers, even for small businesses, said George Geis, professor of information technology and entrepreneurship at the UCLA Anderson School of Management.

“The online sites have done quite well, so consequently, in a challenged economic time like we still are in, it’s important to recognize that you want to be where people are hanging out,” Geis said.

Businesses are using the service to promote their products and services, and keep their customers in the loop about discounts and special events, but the most effective social media marketers go far beyond that, said Amy Kramer (@amykramer), president of Counterintuity, a Burbank-based marketing consulting firm that advises clients to set up Twitter and Facebook accounts.
Having exchanges with online contacts is, in many cases, more important than simply blasting out advertisements in the form of Twitter posts, Kramer said.

“That’s the key that a lot of people miss is the relationship part,” she said. “People will tweet, ‘Oh, buy this. Oh, buy that,’ but what helps businesses the most is when they engage because it’s a very interactive medium.”

Kramer manages two Twitter accounts where she has exchanges with clients and friends.

On her company’s account (@counterintuity) she will share announcements, but she will also distribute news related to marketing and useful information that might be of interest to her online followers, while not having a direct connection to her business.

She also mixes in her observations on a personal account (@amykramer), where she talks about marketing, but also recently tweeted, “Getting my embarrassingly dirty car washed. I feel less ashamed already.”

“It’s about relationship-building; establishing yourself as an expert in your field, but also making people feel that you’re relatable,” said Kramer, who recently added a client from among the neighborhood moms who monitor her posts.

The networking tools are becoming more valuable during the recession, when businesses are cutting back on advertising budgets, owners said.

They are also giving consumers a platform for discussion about products and services, a dimension of online communication that has become important for shoppers, said Kendyl Young, an independent real estate agent who regularly updates her Facebook, blog and Twitter posts.

The online arenas give consumers an opportunity to learn more about items they care about while interacting through a business’ website, but comments are directed at other readers instead of the vendors or service providers, Young said.

Visitors to Young’s blog may begin discussing their preference for neighborhoods or their interest in finding a location for their families without asking Young directly, she said.

That makes the blog a useful destination where visitors interested in Glendale homes might find themselves sifting through collections of posts and launching into exchanges with other readers, often leaving them more knowledgeable than they might have otherwise been, Young said.

Consumers have other places where they can discuss homes, but Young’s posts about trends and home market developments that might interest prospective Glendale buyers keep visitors coming back, she said.

Discussion on the Facebook page for Revelation Tops in Montrose has also become popular among customers, co-owner Mary Dawson said.

Dawson posts pictures of new dresses or announcements for special events, which often spurs conversation about what customers may like, dislike or want to reserve.

But with regular updates and online comments, customers stay connected, she said.

“They love the little quick communications because it’s quick and painless and fun,” she said.