The Client:myBurbank.com is a locally produced website that works to capture both the Burbank community and the outside events that affect Burbank and its citizens. The site was originally launched on April 1, 2010 as BurbankNBeyond and has been updated with community news daily ever since.

The Task: Relaunch the site as myBurbank.com and institute a redesign and functionality improvements.

Our Work: Working from myBurbank's new name and logo, Counterintuity brought a fresh look to the site, and also restructured the way content is organized throughout the site. We also. performed Search Engine Optimization and incorporated a Burbank Master Calendar that places local events in one convenient location—something no other website in Burbank has. 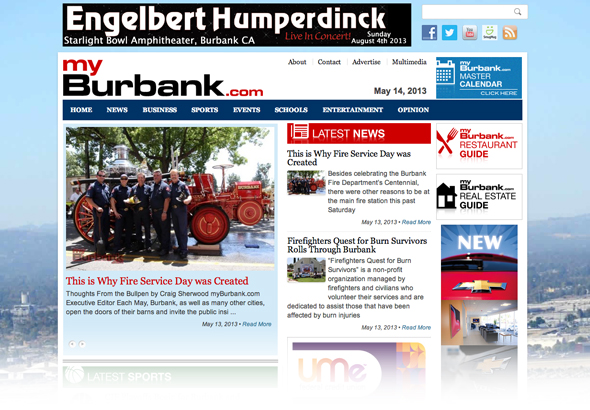 "After taking our former site, BurbankNBeyond, as far as we could, we wanted a name change and a new identity that would connect us more strongly to Burbank. After coming up with the myBurbank.com name, the challenge was to develop a website that was professional, yet had a hometown feel that Burbank people would embrace. That is why we turned to Counterintuity.

After meeting with Lee and Amy, we were convinced that they not only had our best interests at heart, but were as excited about the project as we were. We relied on their expertise for all aspects and they delivered. They are well connected in the community and understood our needs. Not only was the new website design striking and extremely functional, but they also helped us with other aspects of our business, including branding and promotion. Once the site was live and functional, they were still there with constant support to make sure everything was right. If you are serious about what you want and need to stand out from the rest, Counterintuity is really your only choice and will deliver you long term success."